Home > Things To Do > Theatre > The Curtain Club 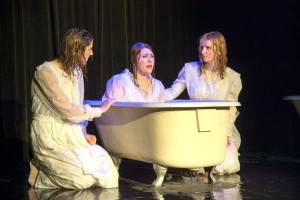 For over 63 years, The Curtain Club has provided quality theatre at an affordable price to the citizens of Richmond Hill, Ontario and has been recognized as a centre for developing artistic appreciation, creativity, personal growth, and friendship.

Founded in 1954 with about 25 members, we rehearsed in members’ homes, built sets in garages and stored costumes in attics while performing in local halls and schools. In 1961, we moved into a converted service garage off Yonge Street with a 97-seat auditorium. Then, in 1971, club members raised funds and hammers to create our current facility at the corner of Newkirk and Elgin Mills in Richmond Hill, which opened in 1972.

The Royal Canadian Air Farce broadcasted its first few seasons in our new theatre in the early 1970′s.

In the 80’s, we expanded our facility to increase our workshop and lobby space and, in 2009, we took on a $1.2 million dollar expansion and renovation to update our theatre for accessibility, more washrooms, larger kitchen and improved heating and air conditioning systems.

For Membership inquiries email us at: membership@thecurtainclub.org