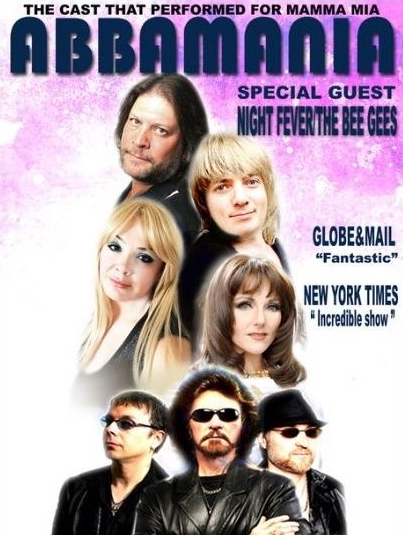 Abbamania is the world’s number one production of Abba. The show consists of studio musicians that recreate Abba live in concert. They are the only Abba production to perform twice for the cast of Mama Mia. Hear the hits from “Waterloo, S.O.S to Dancing Queen”. Also on the same show is Night Fever as the Bee Gees. With all the high harmonies and stage presence of the Bee Gees, they will be performing songs from “Jive Talking, Too Love Somebody, Stayin’Alive to You Should Be Dancing” plus many more. Abbamania and Night Fever perform over 200 concerts year and they will take you back in time when Abba and The Bee Gees ruled the pop music world. Two great shows on one stage.