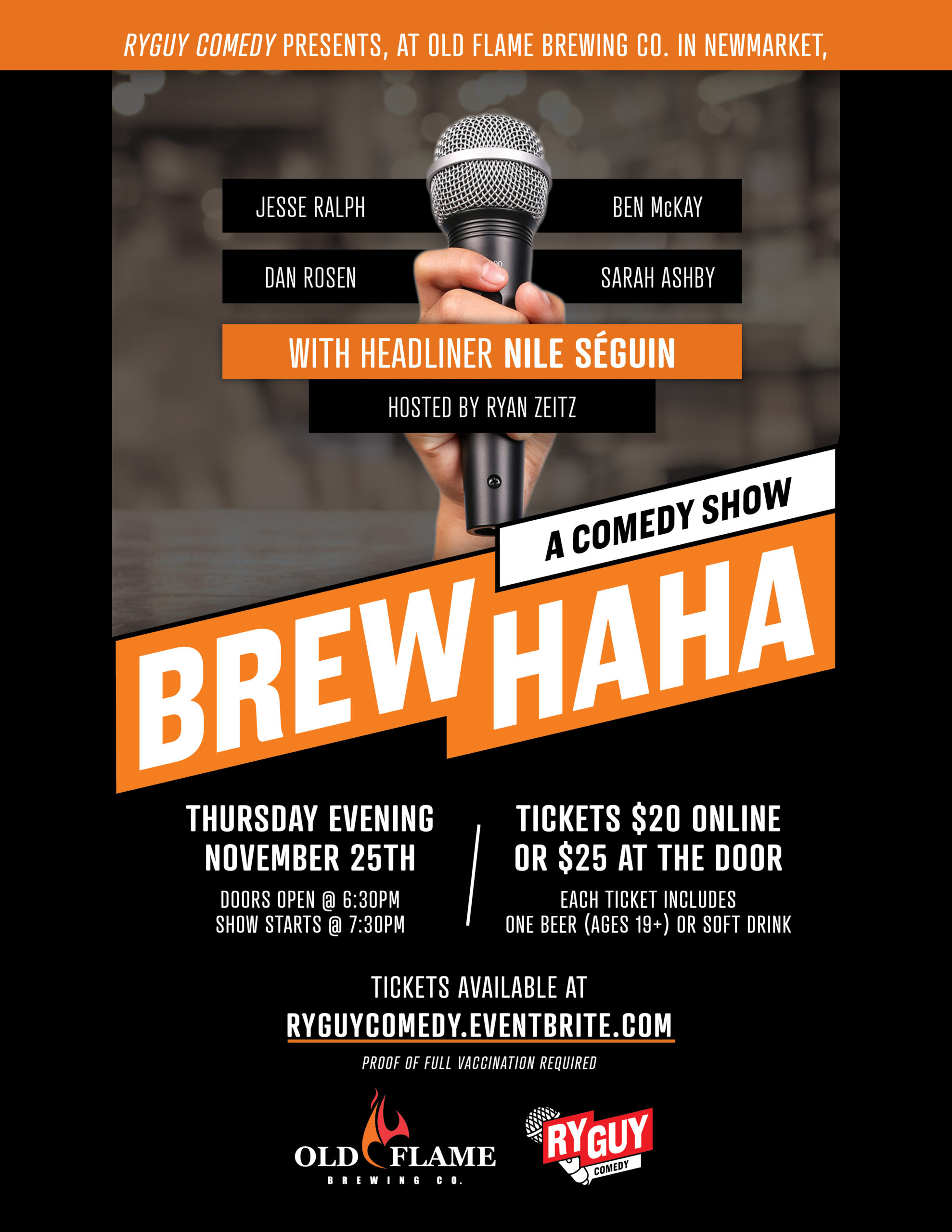 SEATING: Doors are open upstairs in the event space at 6:30pm, and the show starts promptly at 7:30pm.

All seating is general admission. Please arrive early to get good seats and enjoy the 12oz beer (19+) or soft drink included with your ticket!

ACCESSIBILITY: Unfortunately the upstairs event space is accessible by staircase only.
—————————————————————————
COVID-19 PROTOCOLS: The Government of Ontario requires guests to show proof of full vaccination along with a government-issued photo ID in order to attend the performance.

Please check in with Old Flame Brewing Co. staff prior to sitting.

Masks must also be worn while not seated and consuming food or beverages.

Ben McKay, a goofy 22-year old from Kitchener-Waterloo who’s been featured at the Guelph Comedy Festival!

Jesse Ralph, a Newmarket local who recently roasted The B Team, 102.1 The Edge’s morning show!

Dan Rosen, a comedian and filmmaker known for his critically-acclaimed one-man comedy show Game of Crohn’s, which he has performed at festivals across Canada.

Sarah Ashby, a Roast Battle Champion who has appeared in multiple festivals including JFL 42, the Bi-Arts Fest, the Brantford Comedy Festival, and the 420 Comedy Festival.

And your HEADLINER, NILE SÉGUIN!

With appearances on Comedy Network’s critically acclaimed The Beaverton as well as People of Earth, Kim’s Convenience, and The Expanse, Nile is also known as Alister on the Canadian Screen Award-nominated City TV sitcom Second Jen.

Nile has written for Comedy Network’s The Beaverton as well as This Hour Has 22 Minutes, the Gemini Award-winning The Hour (where he was a regular on-air contributor) as well as Space’s final two seasons of Killjoys. He was also nominated for a Canadian Screen Award for his writing on CBC’s Still Standing.
—————————————————————————
RyGuy Comedy would like to extend a big THANK YOU to Old Flame Brewing Co. for hosting this amazing show and supplying their phenomenal craft beer!

Brewery hours will also be EXTENDED to10pm in the taproom downstairs, so feel free to stay and hang out after the show!
—————————————————————————
Follow RyGuy Comedy on social media to hear about future events!